The Parts of an Electric Guitar
So that's what that does!

The parts of an electric guitar together let the viewer know that the are indeed looking at a guitar. So far so good.

An electric guitar really doesn't give that much of a clue as to how revolutionary this invention really is.

An electric guitar is innocent enough looking but when plugged in it is a completely different animal.

Can an acoustic guitar completely drown out the crowd in a full stadium with volume so loud that most of the people could come out with permanent damage to their hearing?

I don't think so.

The parts of an electric guitar that make it electric make that possible. 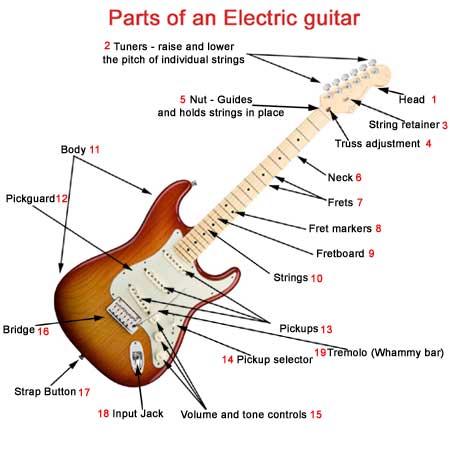 Parts of an electric guitar

The Head of the guitar Is the flat part of wood at the end the neck that holds the tuners.

The size and shape determine the arrangement and kind of tuner and to a certain extent the sustain of notes due to the way the neck vibrates.

The tuners are located at the head of the guitar.

The shape and size of the head determine the placement and arrangement of the tuners.

There are other arrangements too but not too many.

String retainers are mostly found on guitars like the Fender Stratocaster.

They are there to keep the tension on the string and keep it from popping out of place.

The truss adjustment adjusts the curve of the neck to keep the strings from buzzing and to adjust the height of the strings.

If your a beginner and don't want to mess up your guitar, I would suggest that you have a knowledgeable friend that has done it dozens of times or a good guitar tech take care of that for you if you need it.

The nut is a piece of skinny plastic or bone that has slots in it to hold each individual string.

The nut makes a difference in the sound and play-ability of a guitar.

The slots have to be cut properly at the right depth to keep the strings at the proper height above the frets to keep them from making buzzing sounds and to make the guitar easier to play.

The neck is the long piece of wood that projects from the body and holds the fretboard, the frets, the nut, head and tuners.

Inside the neck is a truss rod that keeps the neck adjusted to the right curve so that everything works well.

The frets are pieces of skinny metal that run across the fretboard at regular spacing determined by the length of the neck.

When a chord or note is fretted, you push the string up against it with your fingers. That shortens the length that the string vibrates and raises the pitch to the note of that place on the fretboard.

After you have been playing for awhile they become a subconscious marker that helps you know where you are without even thinking about it.

The fretboard is the top part of the neck that holds the frets and the fret markers.

The notes of the fretboard are all laid out according to the tuning in evenly spaced intervals so that the notes are always in the same spots with the same tuning.

The fretboard itself is usually made of wood.

It is sometimes called the fingerboard.

A regular guitar has six strings.

They go from skinny to fat. The exact size is the guitar owners choice.

When going from one size set of strings to another the guitar might need to be set up by a guitar tech because of the various ways that the strings affect the guitar.

Here's an example: I once got a wild hair and decided I wanted fat strings on one of my guitars.

Well, the neck didn't take the tension of the new strings too well and the curve turned extreme.

I could not play the guitar until I put the old size strings back on.

It's really your choice as to the size of the strings. Just be ready to take the guitar in and have it setup again.

This is one of the differences between the parts of an electric guitar compared to an acoustic.

Acoustics are all hollow.

Some have semi-hollow bodies with a solid piece of wood going down the middle to keep it from howling with feedback.

Some are hollow bodies meant for low volume situations or some other way to keep the feedback down.

Pickguards are there to keep the pick from scratching the body, but that is not all that they do.

On a guitar like a Fender Stratocaster, they have all the electronics mounted to them.

The pickups are electronic components that sense the movement of a string and convert it to a small electric signal that is sent down the cord and into an amplifier. There are many different types of pickups. Each with their own sound.

You can completely change the sound of an electric guitar by changing the pickups.

The pickup selector switches on and off the pickups in the electric guitar equipped with more than one pickup. This changes the sound coming from the guitar.

These controls do exactly what they are named.

These parts of an electric guitar turn the volume up and down and change the amount of treble. That's it.

The Bridge of the electric guitar is where the strings are anchored at the other end of the guitar.

This is one of the parts of an electric guitar that serves multiple purposes.

Not only does it anchor the strings, it is also where the intonation of the guitar is set.

The intonation is adjusted by moving the parts called saddle.

The saddle can move back and forth with an adjustment screw and that is how the intonation is set. This adjustment insures that the tuning is accurate all the way up and down the fretboard.

The strap button is where you hook up your guitar strap.

The best kind of a strap button is a locking strap button. This keeps your strap locked into place and secure.

Note: the output jack is labeled input on the picture, (oops).

The output jack is where the signal from the pickups goes out to the amplifier.

The tremolo bar is one of the parts of an electric guitar that can be used for special effects of raising and lowering the pitch of the notes.

This is also called a vibrato bar.